Originally located by the Stockyards, The Purple Onion has made itself at home in the Junction for the past couple of years. Priding itself on being both brunch spot & steakhouse, it’s not uncommon wait for seats most Saturdays and Sundays, both early and late.

Early? The Mega Breakfast is a work of art, framed on a rather large platter. Picture 3 pieces of Bacon and Sausage, a Pancake or French Toast, 3 Eggs, Homefries and Toast… all for only ten bucks. Don’t dig on swine? The Purple Onion’s Steak and Eggs (6 or 10 oz.) is the house special, and is served with Homefries and Toast… also for around a tenner. No meat at all you say? Three-Egg Omelets are, well, huge and made-to-order. 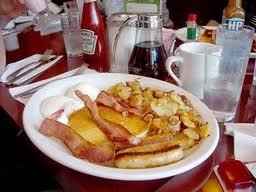 What’s a steakhouse without a sublime burger? Those arriving a bit later in the day have options… including one heck of a Homeburger and, subsequently, one heck of a Hot-Hamburger Sandwich. Other fare is comforting, including (but not limited to) Liver & Onions, Mixed Grills and Homemade Meatloaf… all garnished with Smashed Taters, Gravy and Slaw. The bar opens at 11am and serves-up reasonably-priced hair-of-the-dog… Caesars and pints of Craft Beer included.

There had been a 2-month lull since my wife and I had last been to The Purple Onion. What for? Who knows… Luckily some neighborhood friends reminded us how decent a diner it is. Thanks for the invite, KG&E.