There are a number of reasons why the Danforth has always been our favourite place to live in the city. It could be argued that the food sits atop our list. Known for celebrating variations of Greek, the reality is that Danforth plays host to an array of cultures, whose subsequent cuisine can be found in-and-around every subway station between Broadview and Victoria Park. It’s our hope that this trend continues and becomes better represented at events like The Taste of the Danforth festival in August. 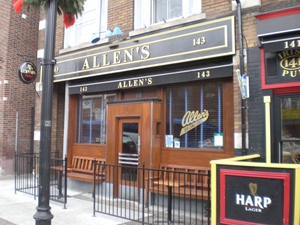 Allen’s (143 Danforth Ave @ Broadview Station) is famous for a lot of things, including some of the tastiest Capon Chicken Wings in the city… not to mention a huge Beer selection and one of the nicest back patios that can be found anywhere. Don’t miss their annual Steak Festival, with over 50 organic farms represented. 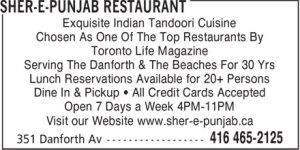 Sher-E-Punjab (351 Danforth @ Chester Station) is one of the only Indian restaurants on the Danforth. So, from a sheer supply-and-demand perspective, it’s the best. I understood why it was the only place around after I ate there, however, as other places just can’t compete. Mulligatawny Soup stands out, as does everything Saag (their version is a mix of Spinach, Broccoli and Rapini.) 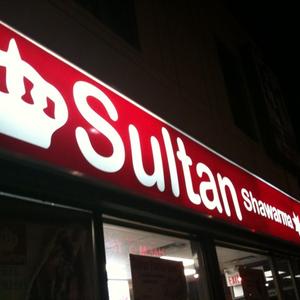 Sultan Shawarma and Falafel (772 Pape @ Pape Station) is so good they opened another location down the street (2558 Danforth @ Main Station). Middle Eastern food was long-missing from Danforth due to the large number of Gyro stands that line either side of the street. You get an awful lot of Shredded Veggies atop the Sandwiches here… A slightly healthier choice when binge eating after the pub closes. 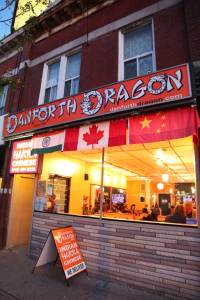 Danforth Dragon (861 Danforth @ Jones Ave), as recently reviwed by Toronto Food Blog, is a low-key Hakka Restaurant that doesn’t look like much from the outside. Don’t let their appearance fool you: their extensive menu has a number of spicy variations that can be found nowhere else on the Danforth. They’ll also deliver to pretty much anywhere between Broadview & Vic Park. Crispy Ginger Chicken and Jeera Beans are a must-try.

Danforth Pizza House (920 Danforth @ Jones Ave) has been around forever. The Pizza is always made the same way: slightly burnt edges, cheese chars, pickup/takeout only. It’s a truly unique Pie, which is just as good the next day.

The Only Cafe (972 Danforth Ave @ Donlands Station) used to be my local. We literally had a backyard that backed on to the rear entrance. It soon became an awesome go-to for dating… a large Beer selection, live music and a great Brunch (with hot sauce to boot). 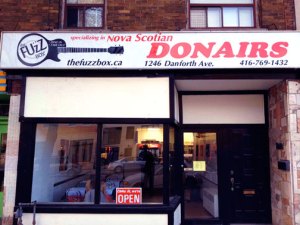 The Fuzz Box (1246 Danforth @ Greenwood Station) just opened, and I am so glad it did. I first arrived at 8:15pm, fifteen minutes after closing, and Neil opened his door to feed me. East Coast Donairs just like they make on Pizza Corner. A real Halifax throw-back (a place I spent a good 4 years). Check it!

Jean’s Vegetarian Kitchen (1262 Danforth @ Greenwood Station) is just down from The Fuzz Box, but the food couldn’t be more different. A mix of Thai, Malaysian and Indonesian, Jean’s cooks everything meat-free… including Mock Shrimp and Mock Chicken that are so realistic, you’d never know it was Vegetarian. For those eaters who insist on Veggies only, this is the place for you.

Rendez-vous (1408 Danforth between Greenwood & Coxwell Stations) is one of many Ethopian Restaurants between Greenwood and Woodbine Stations. We have tried a number of them and have come to conclusion that Rendez-vous is the best… especially when we’re talking about the Veggie Combo. My wife will not eat at any other Ethopian place… meaning neither will I;)

Colombo’s Pizza (1794 Danforth between Coxwell & Woodbine Stations) was the first place I ordered from when we moved to our new house, and it was as good as I remember. We called on moving day, and they delivered a Deluxe Pizza covered in 8 toppings. It’s become a one-a-month habit. Walk-in, they have good Italian Sandwiches, too. They also have “free food and drinks during every Leaf playoff game.”

Len Duckworth’s Fish & Chips (2638 Danforth @ Main Station) is an East York staple, discussed many times on the Toronto Food Blog. Their famous Halibut and Chips rivals anywhere else in the city… best on Danforth hands-down.

Makkah (2980 Danforth @ Victoria Park Station) is such a popular Pakistani take-away that they have a second location further west (1020 Danforth @ Donlands Station). Not only do they have a take-out Footlong Kebab & Naan Roll for $5, their Delivery Special includes 2 Samosas, Chili Chicken (or any Meat Dish), Curried Veggies, Rice Pulao, and 2 Naan. A huge feed, delivered for $20. I’m happy we got their flyer in the mail.