Nestled in the north end of Chinatown, Mother’s Dumplings is a truly Northern Chinese experience in home-cooking. A great place to come as a group and divvy things up at the table, this joint gets busier and busier by the day. With great prices on both their starters and mains, it’s easy to see why.

The Smashed Cucumber Salad ($3.49) is a good place to start. This dish is bound to become a Toronto-wide favorite once Sasur Lee’s recipe goes viral through Kraft Foods. Just the right amount of Garlic, Soy, Oil, Vinegar and Shallot is drenched over pulverised Cucumbers… allowing for all that goodness to really seep in. The Kimchi ($2.60) and Bean Sprout Salad ($1.89), though more popular in Koreatown, are another nice addition to the table for everyone to pick at. 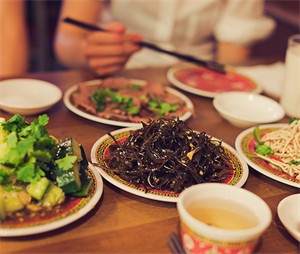 As for the mains, the Dumplings are the why your here. Boiled or steamed, they’re served by the dozen ($5.50 – $7.20) and include a number of different varieties like Pork & Dill, Pork & Chives, Chicken & Mushroom, Beef & Celery,  Bok Choy & Mushroom & Tofu, Shrimp & Egg & Chives… just to name a few. 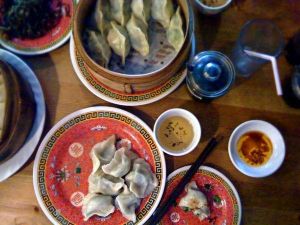 The other draw is the homemade, hand-pulled Noodle Soups… the winner being the Da-Lu Noodles ($7.75). Enough to feed four, homemade Noodles sit in Beef or Vegetable Broth, accompanied by a medley of Mushrooms, Kelp and a Broth-Poached Egg.

When my wife lived in Chinatown, we used to generally gravitate towards the “Best Pork in the North America” at Kom Jug Yuen. At the time, Mother Dumpling’s existed in a hard-to-find basement on Huron Street. Had they moved to College & Spadina any sooner, we might still be living there. Thanks for the recommendation, Marc Leardi.