It’s almost impossible to get lunch for five bucks. Not so long ago, a $3.99 price-point was actually conceivable. In today’s world of the ten/fifteen-dollar lunch, it’s always good to know a few places that don’t break the bank… and still do it up big-style despite being a good value. We all have a few of these places hidden up our sleeves. Here are some of my favs… 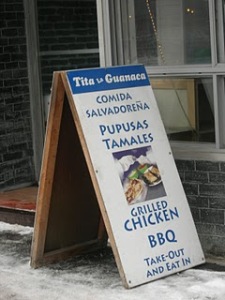 Tita la Guanaca (1028 St Clair Ave West) is an El Salvadorian take-away that makes great Pupusas. Corn-flour dough is wrapped around Pork, Beans and Cheese, and is fried for 5 minutes a side. Hot off the grill, they top it with Vinegary Coleslaw, all for $2.50. Be sure to also ask about their sensational $2.50 Tamales.

Brisa Do Liz Bakery (1174 Bloor St West) makes great made-to-order sandwiches. A true Portuguese bakery, you pick your bread, your meat, your cheese and your toppings for $3.50 (tax in). They also have BBQ Chickens and an extensive hot plate. Thanks for the hook-ups, Mac.

Messini Authentic Gyros (445 Danforth Ave) offers-up their Mixed Gyros for $4.35. Pork and Chicken are wrapped in a Pita with all the fixings… then topped with French Fries like they do in Athens.

Burger Shack (223 Eglinton Ave West) is a North Toronto legend. Numerous things on the menu here for less than a Five, but their Homemade Banquet Burger might be atop the list. 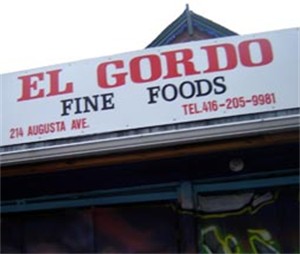 El Gordo Fine Foods (214 Augusta Ave) has 30 different Empanadas on offer for $3 each. A true cash-and-carry, they always have some new creation on the menu. Don’t be shy to ask what’s what; they’ll be more than happy to explain everything… and you’ll be glad you didn’t pay thrice as much across the street.

King Falafel (875 Eglinton Ave West) is the place most often mentioned when I ask my Toronto friends where their favourite Falafel joint is. Their hot sauce is homemade, and they use the smaller, Greek-Style pitas. With ample parking on the corner of Bathurst and Eglinton, there’s no better place to spend $3.78 on a Falafel.

Kom Jug Yuen (371 Spadina Ave), as previously reviewed, has BBQ Pork on Rice for $4. “The Best BBQ Pork in North America” in fact. Right in the heart of Chinatown, there’s no better deal around. If you’re a veggie, forget it.

Caribbean Roti Palace (744 Bathurst St) is tucked away just south of Honest Ed’s on Bathurst. Their Potato Roti ($4 tax-in) has amazing gravy and is spiced-to-order. The hotter the better. And with Doubles for $1.25, this is Guyanese fast-food at its best.

Merchants of Green Coffee (2 Matilda St) is where all the local hipster coffee houses buy their Beans from. Five dollars will get you some delicious coffee and an organic dessert. Try the homemade Iced Coffee ($3) that’s brewed in cold water. Thank goodness this place is still a hidden gem, thanks to it being a bit off the beaten path.