Lots of great stuff happened in Toronto this past year, and the Toronto Food Blog was lucky enough to be part of the mix. We saw the closing of a local landmark, Jilly’s, the Blue Jays going deep into the playoffs, beer for sale at grocery stores, and some new leadership at City Hall. The Toronto Food Blog even surprised itself in 2015, collaborating with the Huffington Post on a piece documenting all of the best places to eat in Scarborough: http://www.huffingtonpost.ca/2015/11/02/best-restaurants-scarborough_n_8400214.html 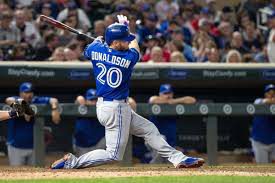 On the food front, the Toronto Food Blog finally got to check out a few established places that were on their hit list… as well as some spots that opened their doors for the first time in 2015. TFB is also thankful for a year of travel that equated to some of the most memorable food experiences of the year. Here is a list of the best and the blerst (sic) 2015 had to offer. 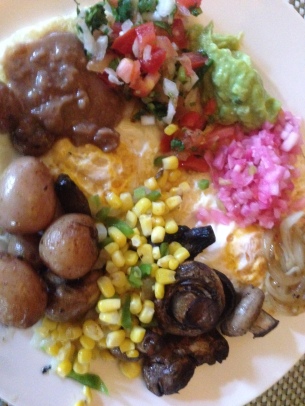 Let’s start with the most important meal of the day. There were a lot of memorable breakfasts that went down in 2015. Narrowing it down to a shortlist is no easy task, but it’s only fair to give credit where it’s due. We traveled with our daughter & neighbors to the Azul Fives Resort in Playa Del Carmen, Mexico. Now, one might not equate resort food as being the best of the best. I have to tell you, though… this place is different. In the seven days we were there, I never once got tired of creating eggs-to-order with their accompaniment of sides, salsas and salads. To say the food at this resort exceeded expectations would be an understatement. A must try if planning a family vacation to Mexico.

Another sublime breakfast experience was a trip to NYC and a visit to Russ & Daughters. Not sure I remember a single 2015 breakfast as enjoyable as their Yum Kippered Board, complete with baked salmon (a nicely non-Toronto touch), cream cheese, tomatoes, onions and capers with a freshly-baked bagel.

Anyone who knows me well knows that I like to eat sandwiches at lunch. Like, a lot. I do so almost every day. I am pleased to say that all of my favorite lunches in 2015 took place right here in the GTA, all at places that opened this year! The Chicken Shawarma Sandwich at Maha’s might just be my favorite of them all. A sandwich so big that a knife and fork are absolutely necessary, this is the best shawarma you may have ever tasted, served on a toasted roll rather than a pita or wrap. Just amazing! 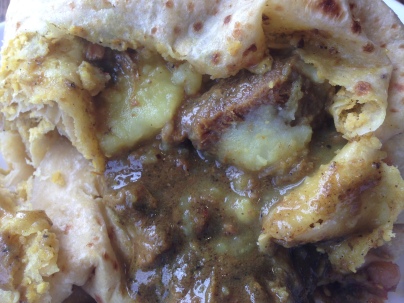 If we’re talking about a non-sandwich lunch, the winner goes to the new Drupati’s location at Yonge and Davisville. Enormous doubles and rotis are served alongside a melt-your-face-off hot sauce that should be applied with caution. One could argue that roti and doubles are sandwiches in their own right… so it’s fitting they made the list.

The dining experience of the year happened to be an out-of-town affair. Every year, me and a bunch of buddies travel to a new baseball park to take in a few games. We usually head down on the Thursday so we can see a couple of different teams play. This year we went to Pittsburgh. I can’t say enough about the food scene in Pittsburgh. Because of the town’s physical geography, some places may be a little hard to find. But if you look hard enough and are willing to make the Uber trek, you’ll find some really amazing places to eat. I really have to thank Carl Mahoney for taking us all to Cure. Chef Justin Severino welcomed us with open arms, complete with a tour of his kitchen. His crew served me the best thing I ate in 2015: Squid Ink & Leak Ash Gnudi, tossed in an octopus and pancetta bolognese, finished with black olive oil, basil and dehydrated smoked tuna (which moved due to the heat/steam of the pasta, making the whole plate literally come alive). Hands-down, best dish of the year. 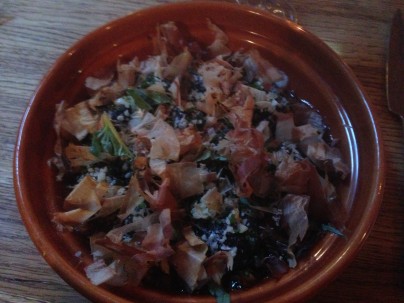 Honorable mention goes out to The Harbord Room. This place had been on our hit list since before we had kids. We made up for lost time by splitting a little too much wine and both ordering the best burger and fries in recent memory. The simplicity of the order, along with the vibe of the dining room and the much-needed break for a little “us time” made this our favorite dinner we had together in 2015.

Thanks for everything, 2015. It was quite a year. If I could summarize using a single sentence, I would say that the Toronto Food Blog is really looking forward to a lot more visits to places like the Fahmee Bakery and no more visits to places like Boston Pizza. Happy holidays, everyone! All the best in 2016. Thanks for reading and I hope you dig the new layout of the blog! 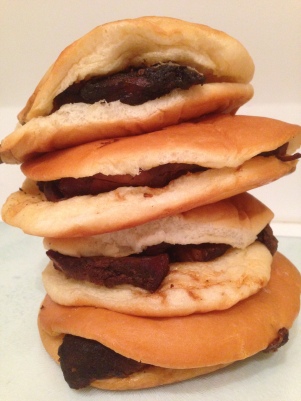